Today is Super Bowl Sunday! After much discussion over the past few weeks we settled on a slightly less than traditional Super Bowl feast — a Chinese Buffet 🙂 I’ll be making (all as healthy as possible…but this is a special occasion so….):

I’ll be posting more photos and recipes later, but for now here is my Duck Sauce recipe. Eric loves duck sauce, but the store bought varieties are basically nothing but high-fructose corn syrup so he challenged me to make a healthy one. It passed the first taste test as I was preparing it and it’s now cooling in the fridge awaiting kick off. 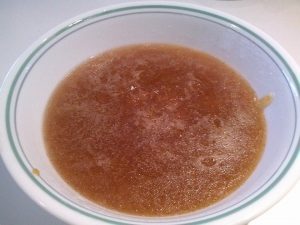 Whisk the ingredients together well in a medium sauce pan. Bring to a boil on low heat; stirring almost constantly. Cool the sauce and store in the refrigerator.